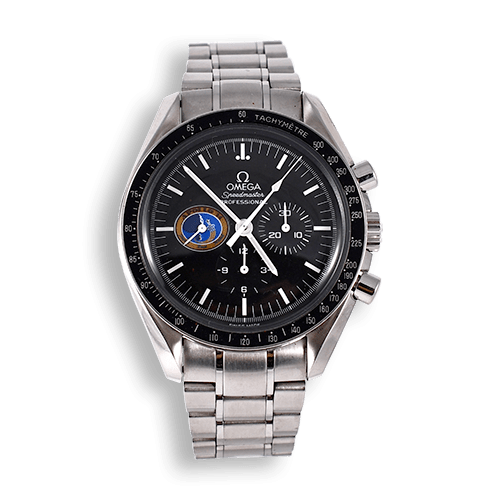 Omega Speedmaster Chronograph Vintage Moon-Watch Professional Limited Edition of 150, Apollo 14 Original Edition of 1997 Original Omega Warranty Papers-Set. This collector's watch is dedicated to NASA's American mission crewed by astronauts: Alan Shepard (from the Mercury program) Stuart Roosa and Edgar Mitchell for the second Apollo flight to the Moon. A mission scheduled just after the famous Apollo 13 mission during which James Lovell announced to flight controllers: "Houston, we have a problem". (problem mainly due to an explosion in the service module) It was this thirteenth mission that earned the Speedmaster the Snoopy Award. The fourteenth therefore constituted its replacement and resumed all of its initial objectives...Last mission of the apollo program to use a lightened lunar module, the following ones will make it possible to carry more equipment and to stay longer on the surface of the Moon .

The Apollo 14 mission, (which is the eighth mission in the order of manned space missions of the Apollo program) is a mission with a scientific objective, the landing site of the mission (Fra Mauro crater) was moreover determined by its great geological interest. Crater visible from Earth, it is one of the oldest on the surface of the Moon. Its origin dates back to the formation of the Earth and its lunar satellite. The rocks that make it up are the result of the impact of a celestial body that brought to light rocks buried at a depth that reaches several tens of kilometres. Very old and located on the edges of the crater, they constitute an invaluable source of information on the common formation period of the Earth and the Moon.

The duration of this mission was two days, it is of type H (mission with precision landing) and will include two exits outside on the lunar soil. Given the probable difficulty of landing on the moon (the ground is on this perimeter, extremely uneven) measures had been taken to allow the Lem a longer flight time in order to search, if necessary, for a landing site compatible with the constraints. of the device. Astronauts Alan Shepard (the first Mercury astronaut to be launched into space) and lunar module pilot Edgar Dean Mitchell (also a former US Navy pilot like Shepard) will have spent a total of eight and a half hours on the surface of the Moon. During this time, command module pilot USAF Major Stuart Allen Roosa relayed data transmissions and conversations back to Earth.

The speedmaster Professional limited edition apollo 14 presented here is a mechanical hand-wound 42mm collector's watch, it is part of the first series of Speedmaster published by Omega in 1997 using NASA's Apollo Mission Badges. Vintage watch accompanied by its original papers, its chronograph movement is the Omega 1861 caliber with eighteen jewels. It is a stop-second movement which beats at the speed of 21,600 vibrations per hour with a power reserve after complete winding of forty-eight hours. This omega movement was developed on the basis of the lemania 1873 movement, solid and efficient, it allows the speedmaster model to withstand vibrations and its waterproof case with screwed back protects it from temperature variations and humidity.

The dial of the watch bears, in the small seconds counter located to the left of the axis of the hour hands, the official logo of the Apollo XIV mission. On its lower part are mentioned the names of the crew of the mission. The back of the case features the circled seahorse of the speedmaster model surrounded by the words flight-qualified by nasa for all space missions and the title of first watch worn on the moon below. 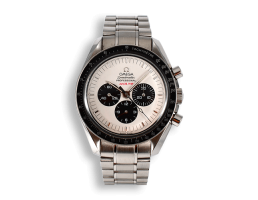 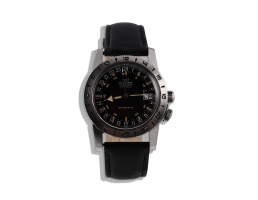 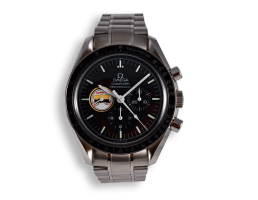 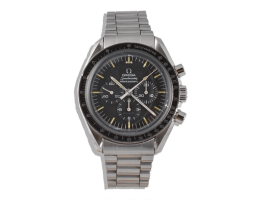